Jessica Elix is the owner of EMPOWER! Professional Organizing (EPO). Jessica provides personalized organizing and productivity consulting to households and companies of all sizes. EPO was established in 2011.

Based on her dedication to small business productivity, from 2011-2015 Jessica successfully re-established a struggling Silicon Valley 501(c)(3) non-profit that provides programs and teams for children, youth, adults and Veterans who have physical disabilities. She remains involved with the non-profit, consulting as the Director of Valor Games Far West – an introductory sport competition for injured, ill, and wounded Veterans.

Although she makes her living as a Professional Organizer and Productivity Consultant, soccer is a passion of Jessica’s. With her background as a Division I goalkeeper, she stays active by training collegiate-bound goalkeepers.

Jessica was born and raised in small town Placerville, CA. Jessica holds her Bachelors of Science in Kinesiology. She and her husband, three children, and pets live in San Jose, CA

Jessica is the Director of The Valor Games. Annie began working with people with physical disabilities 34 years ago in 1986.  In that period she has had the extreme pleasure of working one on one with children, teens and adults and injured, ill and wounded Veterans with physical disabilities in sports, residential camping, social and fitness programs. This has included assisting youth and adults with everything from transfers to  sports equipment, shower and personal care needs to mentoring, coaching, securing funding for numerous sports and outdoor educational  camps, travel to competitions, organizing clinics with current and former Paralympic coaches, and administration of all programs, staff and volunteers.  As a result of her affiliation through sport, camping, and social programs for people with physical disabilities she feels truly to have been blessed to serve her clients.

After 28 years of service to the City of Sacramento, Department of Parks and Recreation, 24 of those with the Access Leisure Division, Annie retired in July of 2019. As the Supervisor for Access Leisure and their Paralympic Sport Sacramento club, she was instrumental in working to create partnerships that allowed them to join forces with such community friends as Shriners Hospitals for Children Northern California, United Cerebral Palsy,  Paralympic Sport Clubs in Lake Tahoe, Mammoth, Silicon Valley, Menlo Park, Santa Cruz, and the Bay Area. In addition, partnerships were created with US Paralympics, the United States Department of Veterans Affairs Adaptive Sports Program, the United States Army’s Community Based Warrior Transition Unit California,  Veterans Service Organizations and facilities throughout Northern California, as well as Easter Seals, the Contra Costa Youth Council, California State University Sacramento, the Sacramento River Cats Ball Club, San Francisco Major League Baseball Club, local school districts, and numerous corporations, nonprofits, and individual donors. These partnerships made it possible to offer the in kind and financial, in kind, and staff support needed to bring unique experiences to those in our region with physical disabilities.

Through the Paralympic Sport Sacramento club, Annie and her team constantly looked outward to the needs of their community to assess regional and national trends in sport for people with physical or visual disabilities, as well as programs for those with intellectual disabilities.  In addition, they connected with their local current and former Paralympic athletes to serve as coaches, mentors, and educators for their programs, as well as partner with agencies such as the US Tennis Association, the National Handcycling Federation, the National Quad Rugby Association, United States Association of Blind Athletes, National Wheelchair Softball Association, USA Hockey, and other national governing bodies, to identify the best coaches, tournaments, and clinics.  They also hosted local and national clinics and tournaments in order to continually provide support for athletes that are interested in progressing to further competition on an elite level.

On Behalf of the City of Sacramento, Annie wrote, and was honored to receive seven grants, totaling over $680,000 from the Department of Veterans Affairs, Adaptive Sport Grants. The purpose of the grants was to expand and enhance sports and recreation opportunities for injured, ill or wounded veterans and active duty injured member of the Armed Forces throughout Northern California and the western states. For 15 years, she organized the “Thank You For Your Service”, adaptive sports day for injured ill and wounded Veterans and active duty members of the Armed Forces, at the City of Sacramento’s “River Cats Independence Field”. This day offered introduction to 9 adaptive sports, along with a community lunch, all free of charge, to athletes and their families.

In addition, from 2006 to 2018, Access Leisure, through their Northern California Paralympic Regional Sport program, served as one of only five programs in the nation chosen and trusted by the United States Olympic Committee, Paralympic Division, to serve as a regional leader to assist all Paralympic Sport Clubs in the west. This included assisting the coordination of programs from California, Oregon, Washington, Nevada, and Hawaii.

Annie was honored to have been chosen as a community leader to attend the 2008 Beijing Paralympics where she and other leaders were responsible for 13 future, hopeful Paralympians that were teens.  She also was humbled to have received the 2010, National “Amazing Leader Award” from the United States Olympic Committee, Paralympic Division.  The award recognizes an individual whose leadership in the Paralympic movement has been transformative and who has mobilized and unified athletes, programs and organizations that improve the lives of people with physical disabilities. She has served as a speaker at the Olympic Training Center for several United States Paralympic Conferences, as well as a presenter at local, regional, state, and national conferences and community gatherings and meetings. She is honored to have been among the founders of the Valor Games Far West during the planning stages in 2012, and to have continued to serve as an Executive Committee Member and the Athlete Liaison for each year of the competition since it’s inception in 2013. “My passion is to provide support and resources for injured, ill and wounded Veterans to once again feel a sense of comradery with their fellow Veterans, as well as to reconnect with their communities, through adaptive sport. I am humbled to have had the opportunity to serve those that have served.  The experience has been, and continues to be, one of the highlights of my life. On behalf of a grateful nation, we salute each and every athlete that competes in the Valor Games Far West, as well as all that have given their last full measure of devotion to protect our freedom.” – Annie Desalernos

Annie is our Athlete Liaison. Dave Peetz is 59 Years old and a retired Firefighter for the City of Hayward Fire Department.

Born and raised in the Bay Area, California, and lived there for 53 years, until he moved to Tennessee with his wife Yvette in 2015.

Dave’s only daughter is the reason for the move and he now has a 3 year old granddaughter and a 9 month old grandson.

Dave started with the Valor Games in its inaugural year, 2013, and has been with the team ever since.

Dave is the Operations Coordinator for The Valor Games.

His duties include Coordinating the Medical support, Volunteer Registration,  Background Screening, Security, and Venue set-up and maintenance as well as Entertainment and our DJ and sound. John is 60 years old and a retired Police Officer with the Fremont Police Department with 32 years of service.

John has a BS from San Jose State.

John currently works as part of the management team at Ruby Hill Winery in Livermore.

John has been with the Valor Games Far West since the beginning in 2013.

John and his Wife Laura have 2 daughters and 3 grandchildren.

John is the Logistics Coordinator for the Valor Games. Anne is a mother of five, a grandmother of six and a great grandmother of two. She reside in Castro Valley CA and currently works for Pri-Med Management, in San Ramon, in the facilities department.

In her spare time, she participates in nonprofit 10k races all over Northern California.

She is looking forward to retirement, in the very near future, to enjoy more time with my family and friends and serving my community.

Anne is The Valor Games Volunteer Coordinator. She is responsible for the organization and coordination of 350+ volunteers each year.

What are you are looking for?

Show Our Veterans Some Love! 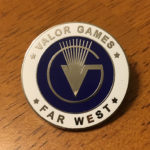 Proud to be a part of the following organizations: