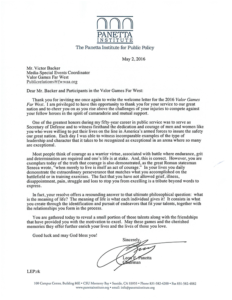 Welcome Letter from Leon Panetta, Chairman of the Panetta Institute for Public Policy, Former Director of the CIA, Former Secretary of Defense.

“Most people think of courage as a warrior virtue, associated with battle where endurance, grit and determination are required and one’s life is at stake. And, this is correct. However, you are exemplars today of the truth that courage is also demonstrated, as the great Roman statesman Seneca wrote, ‘when merely to live is itself an act of courage.’ In your lives you daily demonstrate the extraordinary perseverance that matches what you accomplished on the battlefield or in training exercises. The fact that you have not allowed grief, illness, disappointment, pain, struggle and loss to stop you from excelling is a tribute beyond words to express.”

Proud to be a part of the following organizations: